In an earlier article “Journey of a coach – theory & practice (Part I), we introduced the “circles of influence” which form the context (see diagram below) for coaching process. 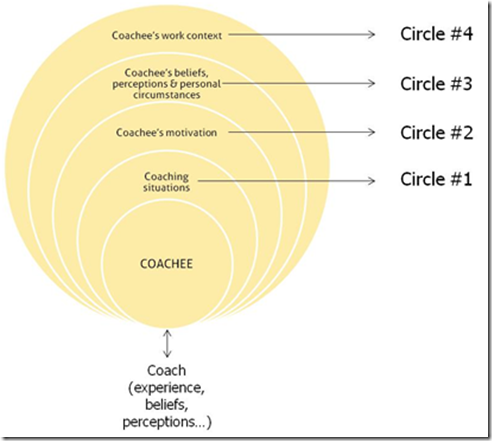 The circles in the diagram above have a significant bearing on coaching effectiveness and need to be addressed by the coach using the theory of coaching (such as Whitmore’s book on “Coaching for Performance”). In the case of some circles, the theory may “end” at some point and the coach will have “interpret” and “extend” it for the specific coachee situation at hand.

We covered the following in Part I of this article:

· Circle #1: Are all situations “coaching situations”?

In this Part II, we will cover the two remaining circles.

Circle #3 above regarding “beliefs, perceptions and personal circumstances” can actually be quite a hard shell hindering coaching progress. But it is often an invisible hard shell because people will share only so much of their innermost beliefs and personal circumstances even though they are impacting their work performance. Coaches make chance discoveries of this shell in the Reality check part (that is, the current state of affairs that needs to improve to meet the Goal) of the Goal-Reality-Options-Will (GROW) model of Whitmore. Here are examples:

· A coachee once candidly admitted that he was himself the reason for his declining performance at work. The reason was that his family was going through his sister’s painful divorce in the US and her life coming back to India. He just could not go about work as usual

· A second coachee had a lot of issues with his manager. He felt that the manager’s lack of domain knowledge resulted in his not realizing & recognizing the value of the coachee’s work. In addition, the coachee seemed to indicate that lack of recognition of his work had to do with his belonging to a minority religious community in India

These are situations of tight-rope walking for a performance coach! In situations of personal crisis, the coach may only help by sympathetic and patient listening. This may help the coachee more than one would think – just getting the problem “off his chest” often helps and relieves stress. Being less stressed, he may be able to come to grips with his personal predicament and deal with it better. However, coachee’s entrenched beliefs on, say, religion and gender can be very challenging for the coach to deal with. Some deep-rooted beliefs may indicate pathology needing help from a trained therapist – far beyond the scope of performance coaching and the ability of the coach.

The last circle of influence is the coachee’s work. Sometimes, people have told me that they are “stuck” in positions – say, “routine” software bug fixing and maintenance where there is really no scope for “learning, enjoyment and fulfillment” (you may like to read My Team is not motivated!!! by my colleague Prasanna Moses on this). Most of us would agree that there is far less drudgery at work in today’s knowledge-centric world than even just 30 years ago. We would also agree that there is no such thing as 100% “sexy” work (unless of course, you are doing breakthrough work of your calling – say, in quantum computing). So, when coachees complain about their current work/role and the lack of sexiness thereof, I ask them questions about what makes it boring, what they can do about it and so on – hopefully making them better aware of interesting possibilities in what they were doing. In some cases, people have hinted to me that they are considering quitting their “boring” job and looking for a reaction. Under such circumstances, to be fair to the coachee and to the coachee’s employer (who is paying my fees!), I would say the best option is to ask the coachee questions exploring his rationale for leaving (without being judgmental on whether it is right or wrong) – like what does he think leaving the job will achieve, how will it get him closer to his goals, how is he sure that the same problems would not repeat themselves in the new organization and so on. The ultimate decision should be the coachee’s based on introspection triggered by your questions. He may still choose to quit – but that is another matter! As far as you are concerned as a coach, you have played it fair & square. It is not unthinkable that you as the coach may actually agree with his rationale for seeking another job!

A related aspect is also the organizational environment in which the coachee works – over & above his immediate work/role discussed above. In sports coaching, the strong individual motivation is a given and the coachee has a great deal of control over what he can and cannot do to enhance his performance. The circumstances for software project managers are different. Their GROW model is in the context of an organization with its culture, policies, processes and so on. As a coach, I have encountered some real challenges here – the Project Manager may be aspiring to do something of value in his project but his line management and work environment may not be supportive. Some organizational policies can be insensitive to people and even draconian. In one software development organization, if project team members logged in less than 40 hours per week of approved work, there would be automatic cuts in their pay while the significant additional work needed at other times went scarcely noticed! How can one be expected to learn and enjoy their work in such an environment? In such cases, we do bring it up with the line management for addressing them and offer our help as well. To be honest, it worked sometimes and it did not in as many cases.

In summary, as a practicing coach, you are bound to run into situations like the ones above which make you stop and ponder as to what extent theory can lead practice! You may need to introspect and think of newer ways of extending “theory” or just use good old common sense and move on! At PM Power, we have the coaches’ conclave where these situations are discussed to see how best to help the coachee considering all the circles of influence. It has significantly helped our coaches in specific situations and in honing their coaching skills in general.

We invite you to share your coaching experiences (as a coach or a coachee) and we would be happy to share our perspectives which may be of help. You may reach us at info@pm-powerconsulting.com.