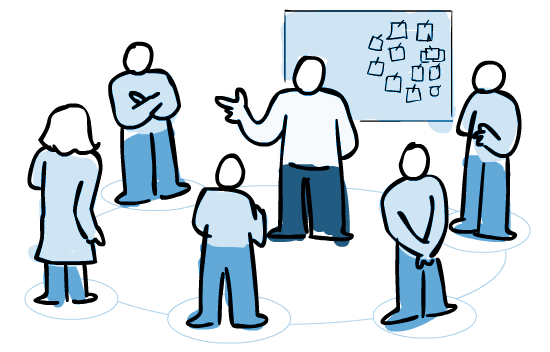 Gwen Thomas is an external Agile coach hired by a leading financial institution, a household name in the UK and Europe. She has been coaching several teams in the organization for a couple of years now. The past two years had been hectic for the teams in addressing almost a never-ending list of functions & features just to keep up with competing products. The teams and the SMs had gone through this trial by fire and in Gwen’s assessment, reached a level of self-reliance – so much so that Gwen now spends less time in active coaching and mostly responds to “pull” from the team for specific assistance.

Enter Felix Drost recently hired as the Chief Architect for the business unit Gwen is associated with. Felix started attending sprint reviews of teams including the ones coached by Gwen. During sprint reviews, Felix began asking questions about how the products they were working on have improved over the past two years. In private conversations with Gwen, Felix asked her whether she felt the Scrum Masters she was working with were adding tangible value in terms of product improvement. Gwen shared the gist of this conversation with her teams and asked them how they should respond to Felix. Gwen could see some of the SMs were dispirited by Felix’s pointed questions. After all, in the last two years, they had all believed they were doing a great job and keeping the product managers happy. And now this – out of the blue – that too from a senior leader!

As Gwen, how would you approach the above situation towards actions / resolution?

Sometimes, it so happens that Scrum teams are cruising along happily with perceptions of their own performance as well as feedback from stakeholders indicating that they are doing very well. Occasionally, a new stakeholder may come into the picture; his perception and feedback on what the team has done so far may not be so great, much to the team’s chagrin. In this instance, this seems to have happened – and out of the blue. The new Chief Architect (CA) is implying that in the past two years, the SM and the coach have not enabled the team towards product improvement.

Gwen, the coach and the team first need to ascertain whether the CA is citing specific product issues reported from the field as a consequence of inadequate attention to product improvement – for example, are there issues like poor response times, unacceptable levels of application availability etc.? Is the CA citing outcome metrics demonstrating cause and effect? Or, in the absence of such issues, is he asking a general question on what has been done to improve an already well-performing product?

Regardless of the context of the CA’s queries, the truth about the past should mostly be evident from the product backlog. For example, how many Product Backlog Items (PBIs) relating to product improvements are there in the backlog? How many have seen the light of day in implementation? Are the ones considered low priority and not making it to sprints & releases now contributing to product issues as above? If so, surely, the team should already have heard about it rather than from the new Chief Architect. As an extreme, if the team has hardly ever championed product improvement PBIs in the past, the SM and even the coach have something to answer for. On the other hand, if there are indeed such PBIs languishing at the bottom of the backlog, then product management owes an explanation to the Chief Architect and to other stakeholders.

Therefore, the team, facilitated by Gwen, should assemble a summary of what the team has achieved in the last couple of years including what has / has not happened in terms of product improvement and engage with the Chief Architect to address his perception that the primary cause is ineffective SM / coach. In this exercise, It would be very beneficial if product management and business sponsors participate. The idea is not to hash the past too much to “fix” responsibility but understand the past in perspective, learn, educate, manage expectations and adapt for the future to – all to define clearer goals to improve the product and pursue them.

In addition to the above, Gwen can share her own perspectives one-on-one with Felix Drost and sensitize him to the fact that the team is kind of demotivated by the tone of his queries (singling out and berating the SM?).  Gwen should convey that his end goal of improved focus on product improvement is better served by a more empathetic and supportive communication from him to the team.