Mindfulness for Agile Culture and Mindset – Extract from our upcoming book 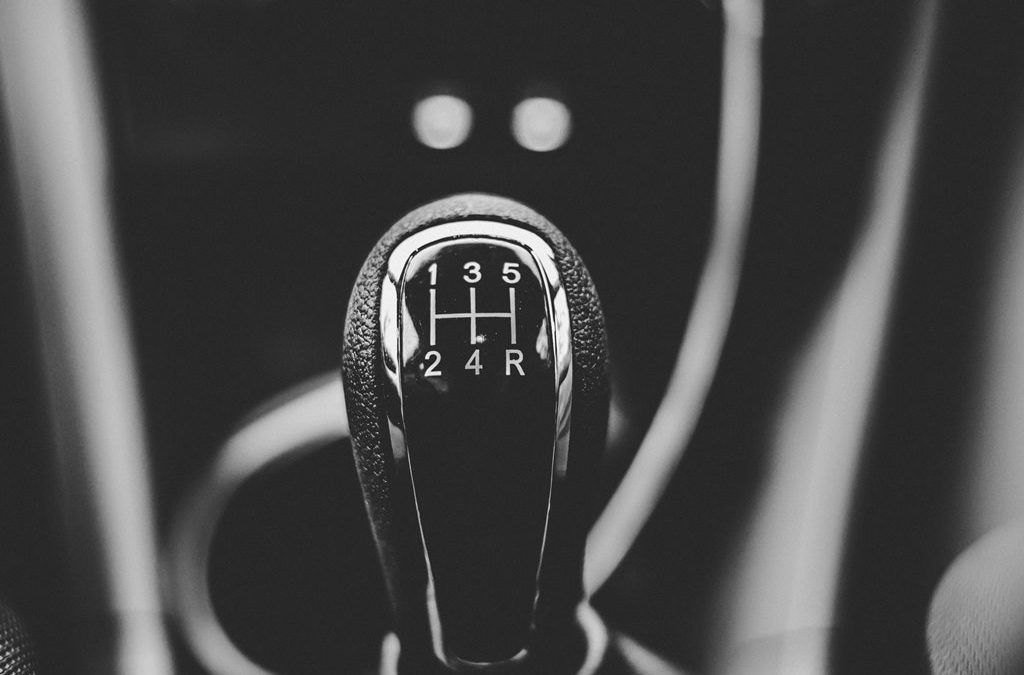 This blog post is an extract from our upcoming book on organisational agility. The objective of the book is to help leaders, managers and change agents (including internal and external agile coaches) involved in organizational agile transformations and project / program managers, scrum masters and team members address the concerns of IT organizations as they try to reap benefits of moving to Agile – in a specific sense, to address the gap between an IT organization’s stakeholders’ expectations from Agile (to meet business needs) and their real outcomes and to help the leadership in IT organizations understand and implement agility at an organizational level (as opposed to agility in teams and projects). The book is expected to hit the stands by the end of this year.

“And you said that the new management was struggling to bring a change of mindset?”
“Yes. That is right.” 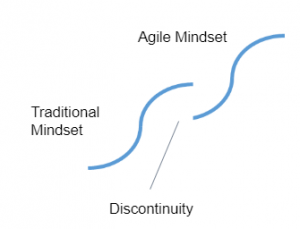 “The problem is that going from a traditional mindset to an Agile mindset is paradigm shift. It is not a continuous process of change. There is a discontinuity over which you have to jump. You may have to unlearn a few old things before learning new things.”
“Oh! I see…”
“The problem is that many people believe that a change in mindset can be brought about by changing processes, tools, ceremonies etc. But this is only the tip of the iceberg. There is a big difference between ‘doing Agile’ and ‘being Agile’.” I think most of our managers try to force agile in by ‘doing Agile’.”
“Can you elaborate on that?”
“It is the changes to soft aspects of the Agile journey that brings in the real culture change. While it is important that changes are brought in the processes, ceremonies, artifacts, tools and metrics, the real change should happen in the area of values, principles, communication, shared-vision, motivation, collaboration and leadership styles.” 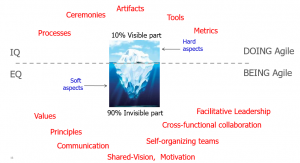 “You mean that an IQ-based approach is not enough. And EQ-based approach is what is required.”
“It is not enough to have staff of high IQ. It is when leaders and teams evolve to high levels of Emotional Quotient (EQ) that real transformation can happen. It is high levels of EQ that allows for facilitative leadership and self-organised teams. Without high EQ these two are impossible. And without these among the people, no organisation can be truly Agile. Without facilitative leadership, collaboration among teams and self-organisation of teams cannot happen. In a command and control style of leadership, people do only the minimum required to satisfy their bosses.”
“What is facilitative leadership?”
“Facilitative leadership is a people-centered approach to leadership. It develops and supports a culture in the workplace that focuses on goal achievement through people relationship dynamics. A facilitating leader is one builds solutions through agreements in his/her team that incorporates the group’s optimal thinking. He/she allows for criticism and fosters understanding in the group even when individual views are conflicting.”
“And, what is self-organisation?”
“Let me see how to put this in easy terms. Let us take an example of a family function, say a birthday party. When you hold a birthday party for your son or daughter at home, you can notice how everything falls into place. Every family member seems to know his or her role, including the children. The party becomes a success not because you or your wife orders everyone around. One of you takes charge of the invitations, one of you buys the food and party items, and so on. Even the children know their roles. An elder child may take charge of entertaining his younger sibling’s birthday guests by organizing games. Everyone is working to a commonly understood vision: Make the birthday boy/girl have a memorable birthday by making the party a success. This is how self-organisation works in an organisation too. A truly facilitative leadership will foster a culture where once there is a common vision and understanding of the goal to be reached, people fall into their appropriate roles, collaborating and correcting each other as needed, to reach this goal.” 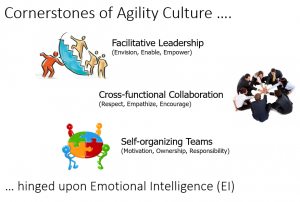 “Okay.”
“Of course, this means that team members are allowed to experiment and fail and learn from their failures. It also means that criticism is constructive and not destructive. Also, I don’t know whether you have noticed one thing. One of the key things that results from self organisation and cross functional collaboration is that the organisation presents the right face to the customer. A customer sees a vendor organisation horizontally, but these organisations are normally structured vertically which creates siloisation. A organisation thinking in silos presents a disunited face to the customer.”
“Aha.”
“I think that one of the practical steps to evolve to a higher EQ is something that has only recently been recognized. It was very well understood by our ancient sages. This is Mindfulness.
“Yes. I have heard about this. What exactly is it?”
“Mindfulness is about being in the present moment with full awareness of what is happening within oneself (thoughts, feelings, emotions) and outside (situations, people) and responding wisely and consciously rather than reacting compulsively.”
“Oh, that is a mouthful.”
“It is not as hard as it sounds. The real requirement is to be aware of your own thoughts and actions and understand others’ thoughts and actions with empathy. That is all.”
“I find that it is extremely difficult to control my thoughts and emotions.”
“The idea is not to control your thoughts, feelings or emotions! It is to be aware of them.”
“So, being mindful helps a leader in adopting facilitative leadership and teams to become self-organizing entities with high levels of cross-collaboration.”
“Yes. Self awareness leads to self regulation which leads to self motivation. And self awareness leads to empathy which leads to improved social skills.”
“So, are you almost proposing something called a Mindfulness Quotient?”
“Yes. In fact, it is already mentioned in literature. It is an even higher level of achievement than even Emotional Quotient.”
“That’s interesting.”
“Well, here is a story you may have already heard before. It is about a hunter and a flock of pigeons.” 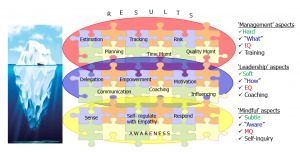 “Yes. I think I have heard this story before. It’s moral is that there is strength in unity?”
“Well, it teaches more lessons than that. Let me continue. There was once a flock of pigeons who was flying somewhere. On their way, when they looked down they saw a field where some grain had been spread to dry. The pigeons thanked their good luck at having come to such a great feast. They alighted and started pecking at the grains. But, alas, it was a trap. The grain had been spread there by a hunter hoping to lure the pigeons down. When the pigeons, unaware of the trap, were eating the grain, the spring of the net unlocked and the net spread over them. The pigeons knew they were trapped and bewailed their hard fortune. They looked up to their leader, Paravat, and told him. ‘Sir, please save us from this trap before the hunter comes looking to see if his trap has caught something. Or soon we will be eaten by the hunter and his family.’ Paravat thought for a while. He knew that their case was hopeless. But, he formulated a plan. ‘Why don’t I ask them all to peck at a particular place on the net. If all of us peck at the same place maybe that spot will become weak and we can force a hole there through which we can all escape.’ Paravat was not at all sure that this plan will work. However, before he told of his plan to the others, he checked himself. He thought, ‘If I told them this plan, they will all obey to do my bidding because I am their leader. Maybe I should keep silent about this plan and ask them what they think.’ So he told them, ‘What do you all think we should do now?’ Meanwhile, one of the youngest pigeons started flapping his wings and rising in the air. The others looked and saw that the part of the net under which this pigeon was standing was lifting a bit. Then, some of the other pigeons also started flapping their wings and saw that the net was rising. So, suddenly all the pigeons flapped their wings and the net rose into the air and the pigeons together flew with the net above them to a place where a rat who was their friend was living. They alighted there and the rat gnawed at the net and made a hole big enough for the pigeons to escape.”
“Great story.”
“What did you learn from this?”
“Well, the story I heard was slightly different. You seem to have modified it a bit! In the story I had heard before, it was the leader’s plan that they all fly together. And the moral of that story was ‘in unity there is strength’, ‘always make sure you have friends’ etc.”
“So, what do you see as the learnings from my slightly modified version of the story?”
“Well, I can see self organisation and collaboration among the pigeons. How else could they have achieved their goal of freedom? They had a common goal that everybody had in their minds.”
“Yes, they self organised and collaborated to combine to lift the net into the air. What else?”
“Facilitative leadership. The pigeon leader, Paravat, created an environment for the pigeons to formulate their own plans for escape.”
“Okay. What else?”
“That is it.”
“Are you sure?”
“Yes.”
“Well, think of the story carefully. What made the pigeon chief decide that he will not tell them about his plan to escape?”
“He thought that if he told them, they would not think of anything else.”
“Right. That too is part of facilitative leadership. What else?”
“Well…”
“Normally leaders behave almost mechanically. They know that their followers are waiting for them give a solution. Paravat too, was about to give his solution to the problem to them.”
“But?”
“It was the fact that he was aware of his own thoughts that checked him from giving out his solution. This made him think of the consequences. If he had not been aware of his own thoughts, he would have mechanically told them of his solution, which really did not have much chance of succeeding. By controlling his thoughts and actions he was able to allow the other pigeons to come up with a plan.”
“Okay. I get it. Mindfulness is the key factor underlying facilitative leadership, self organisation and cross functional collaboration.”
“Exactly. Talking about Mindfulness brought my mind (ha!) to another topic. This is individual discipline. We had briefly touched upon this before.” 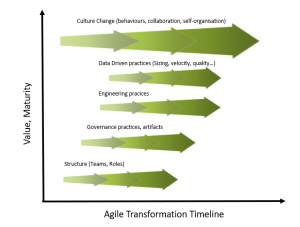 “I see. Interesting. Why?”
“Mindfulness practiced well makes you always aware of your thoughts and actions. A normal person responds to outside stimulus without thinking too much about it. The reaction to stimuli, especially threats, comes from the gut or the spinal cord, not from the brain. However, what I am saying is that in our current normal environment, where we interact with people, we can use our mind and be vigilant about our thoughts and actions. This awareness can only be built up with mindfulness training. And it is this awareness that instills discipline in us. It was Viktor Emil Frankl, the great Austrian neurologist and psychiatrist and holocaust survivor, who said, ‘Between stimulus and response, there is a space. In that space is our power to choose our response. In our response lies our growth and our freedom.’ Awareness helps us choose our response properly. And that is individual discipline.”
“You seem to be suggesting that this individual discipline has a key role to play in Agile Transformation? I am not sure how disciplined people are.”
“Yes. Individual discipline is a key component of an Agile organisation. I will tell you why…”