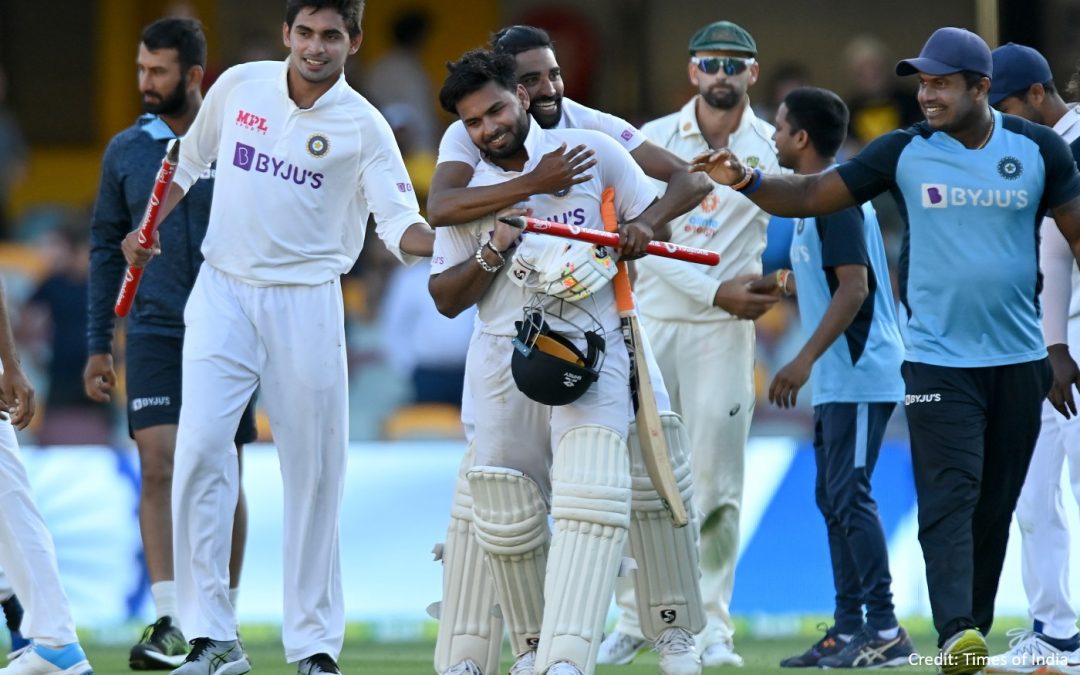 Since 1933 (second ever test match of India) this was the first match where bowlers had the least experience.

Since 1947 Australia has never lost to India at Gabba.

Since 1988 Australia are undefeated “by any country” in Gabba.

In 545 tests before, India had successfully chased beyond 300 only twice before. However, it had never ever scored 300+ on the last day of a test match.

A lot has been written about this test match. Even if you are not a cricket fan, I am sure it would have been hard to miss that on 19th Jan that the lambs came out of the abbaitor unscathed and joyous!

There’s a lot about high performing entities that I have learnt from this match alone. I will, however, restrict the scope of to just one topic – Collaboration during the match.

Collaboration is the process of two or more people, entities or organizations working together to complete a task or achieve a goal.

We will see the test (pun intended!) of collaboration with three scenarios.

After an abysmal first test, captain Kohli goes home on a paternity break. Thereafter, Rahane as the stand-in captain  for Kohli, turns the situation 180 0 and leads the team to glory against all odds.

The commentators, analysts and many a follower of the game start murmuring (some even suggesting) – that Rahane would be a natural leader for the team.

Going by past history, such claims or intentions, if nurutured by Rahane would be considered as natural.

Surprisingly and shockingly for most observers, Rahane was clear – Kohli is his captain. He was standing in and will go back to supporting Kohli when he’s back for the next series. Rahane saw the opportunity to lead as a role he played for the team and not as an attempt at building his power position.

Rahane threw away the opportunity to stake claim to power with equanimity. How did such a collaboration work?

2. Collaboration: Can opposites work together?

When Pant joined Rahane at the wicket on the final day, it was certain that one more quick wicket and Australia would romp home to a win.

Pujara was clear that he was not going to stick his bat out to anything until absolutely necessary. This implied that runs might not come his way. He was even ready to take blows on his body, tire the bowlers out and not drop the guard on his wicket.

Pant, on the other hand believes in taking on the bowlers. He wants to go after them and score run briskly. He wants to take the battle to the opposing camp, even if it means there’s a risk of losing his wicket.

Usually, when you collaborate, you work to a single plan. Here it appears that the two players have very different plans.

To me, this would be the most challenging situation for collaboration. Credit to both the players, to back each other up with their respective plans.

The spectacular victory in this match has glossed over this challenging situation.

Everyone had a positive spin on this collaboration. The perspective – Pujara with his stodgy defence ensured that India had six wickets to go with 20 more overs for the day. It allowed the remaining players to charge or shutter as appropriate with minimal risk of losing. Pant took the charge and made victory a possibility.

The possibility of losing this match was real even till the very end. I am not sure if this perspective would have held, in case India lost this match.

Despite these apprehensions, one can decipher from this act of collaboration:

3. Collaboration: When only one can be a hero

When you sense there’s a possibility of a victory, what do you do? Do you take charge to make it happen? Or do you hold the fort and let the other person make the victory charge.

If you succeed with the charge – you are the visible hero. If you go down in the process, the other person has the pressure of holding the fort with reduced ammunition!

By the end of 92 overs, India needed 52 to win off of 48 balls! In a test match, against the top Australian bowlers, this was not something one would say is easy or even possible. The two youngsters Pant and Sundar were both keen to prove that they have the ability to take the attack to the opponents.

A six and a four by Sundar off Cummins meant that he was going for the kill. By the time he got out in over 96, India needed 12 to win with four wickets in hand.

What do we see in this collaborative act?

What causes such a self-less collaboration? [While this story is one event, this trend has persisted over time now.]

This is possible only when collaboration becomes a way of working (or playing).

For that to happen the essential elements we saw were – a sense of purpose, a feeling of safety, transparency  and respect in how they conduct themselves, a commitment to excel in their profession, an ability to express onself in the way they see it appropriate.

As always, I would love to hear your perspective both on collaboration as a culture; and the Gabba match!