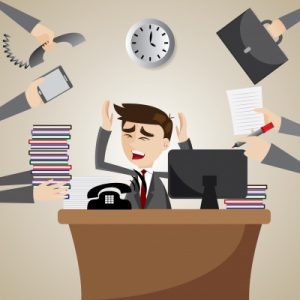 Years back, I was working on a project and putting long hours, my boss noticed this and asked me to meet him first thing the next morning. Next morning when I met him, he said “if the work requires long hours, see that you work late only alternate days say Mondays, Wednesdays, Fridays. If you work on Saturdays, then no work on Sundays.”

I was skeptical, asked what if I have to stay back on Tuesday, he said no worry, just shift the days. Sensing my disagreement, he asked me to to try this for a week and assured that he will take care of any untoward outcome resulting from this. He added, “I could have had this meeting yesterday, but I myself follow this and yesterday was my day to go home on time.” I was forced to try this and was better for that, it worked!

I realized that I made less mistakes as it prevented the fatigue that normally happens with long continuous working. I was postponing some important tasks on the personal front, blaming my project. After this I was able to deal with that, though not immediately. I realized that the project was not the main cause for the delay.

Looking back I found, that it’s a good practice to adopt. The approach is very objective – try to remain productive by reducing fatigue of continuous work and maintain work-life balance. Of course this stretching has to be for short periods and not something which is the norm. If it is the norm then you have to fix other things.

As a coach I have had the opportunity to pass on this to many of my coachees, and it has always worked.

Recently, I casually asked one of my coachees Anil, how he was doing, in our coaching meet. He blurted out that he was under tremendous pressure. On the work front he had taken up the role of PM from his manager who moved to a new project with barely any handover. He was to look for a new bigger house to rent, he was unable to do that and his in-laws were coming to stay with him soon.

I shared my experience, Anil was not very convinced. So I told him to give it a try, and also announce his plans at work and home. We discussed other things and parted.

When it was time for next monthly meet Anil rescheduled it. We eventually met after a couple of days, I asked him the reason for the reschedule.

Anil was all smiles, he said that he found a house and as he was shifting home and so he had to reschedule the meeting. He thanked me for it, I looked surprised.

He said “Vasu, what you suggested worked out well. I went home late on the day I met you last and announced this at home. My wife was not very convinced, though. But I kept at it and did head home on time at least two days a week and looked around for houses and was able to find it.”

He shared that there were other ‘side effects’, his team members had told him that he has calmed down and seems to have the project under control. Anil’s view was that it was the result of the reduced pressure on him as he was able to focus on all aspects better.

In my final coaching meeting I asked him on the state of this practice, he said he continues to do it and encourages his team also. He is not able to do alternate days, but ensures that there are breaks, understands the principle.

Do give this a shot if you are in a similar situation.