S-curves : beating the challenges of growth 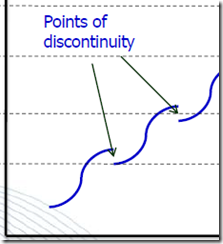 S-curves are probably the simplest representation after the 2×2 matrix, to not only represent, but also to understand many management and technical concepts.

S-curves represent any function that
starts slow and after a certain time, reaches an accelerated growth phase and then flattens off.

S-curves have been used to represent a typical product lifecycle, technology growth or personal growth among other things.

This also represents the law of diminishing returns, when, after a certain stage, additional investments or efforts spent may not return the same results.

PM Power’s approach has been based on identifying where an individual or organization is on an S-curve, in their growth journey and help catalyze excellence in the chosen area of  focus. The key is to identify the inflection points and see how to maximize the opportunity.

As you see from the above figure, it is important to initiate the next S-curve, before the first one peaks. One metaphor that I remember was used by Vineet Nayar, former CEO of HCL Technologies, where he said that the way Formula 1 race drivers exploit the bends can make the difference between winning and just completing the course.

While the normal tendency would be to slow down around a curve, the more daring will use the knowledge that most others would slow down, and in a controlled manner, overtake others to get ahead!

In particular, identifying points of discontinuity – sometimes based on a leap of faith, is the critical first step.

Research indicates that a person would normally go through three S-curves during the course of one’s career.

Organizations that understand the size of potential markets early and identify strategies to ride the tide, or like a wind surfer, identify opportunities that they can ride on, to move faster than they would have, as individuals.

Identifying new market opportunities – such as in uncontested markets using Blue Ocean approaches, would require clear ground up thinking on all aspects of the organization. Business models, technologies used as well as employees and customers.

The stylish S-curve depicted in the PM Power logo symbolizes that.

Whether it is to obsolete what has worked in the past and renew oneself or a product line, or setting ambitious goals for an organization to set new benchmarks, remember the behavior of S-curves.

Stay ahead and win! All the best!