CHOW #66- Being motivated in tough times 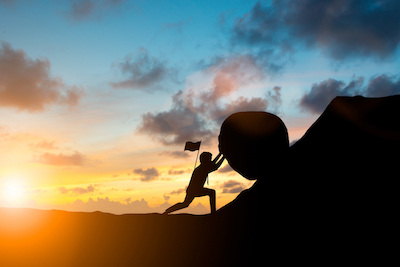 Ram, is running a fixed price project with a team of 24. He has built this team over the last 6 months. They have completed two early releases, and 4 releases are due over the next 12 months.

Ram has built a good rapport with all his team members, and is well regarded by his team. Ram, is sensing that the organization could soon be laying off 10% or so of the people. He’s very concerned about the impact that it will have on his team? Can you analyze Ram’s motivation level? (Remember, his own motivation level will, generally, significantly influence his team’s motivation level.)

At the outset, I feel good about two aspects here:
1. Ram has built a rapport with his team. That shows he cares for his people and they seem to acknowledge that.
2. Ram also seems to be a good sensing leader. He’s not waiting for the organization to announce any major decisions. He’s getting the feel on a potential layoff. [There’s always a possibility that the lay-off does not happen. But what if?]

Here are a few possible things that can be going on with Ram.

He tries to ignore what he is sensing. He convinces himself, that he ‘should’ not worry about it, as nobody has formally told him about it. He can get into a state of denial. Ram – in this case is squandering his early sensing capability. Or alternatively Ram can pray and hope, that this will not affect his team. While I am not against praying and hoping, I feel he’s not doing anything actively to manage it. With this background – Ram will be badly challenged to get the team to be at its best spirits.

Let’s say Ram gets past that state. He now tells himself – that he ‘must’ try to prevent the organization from touching his team. After all it’s an important project and with plenty of look ahead work. Yes, all that could be true. But so, will be the case of all the other managers – they also have a good reason to believe the same way. I agree, he should put up a good defense for his team to be not touched, if and when it comes, but that’s unlikely to stop it from impacting some of his team members. He has definitely moved forward in his thinking, but will this be sufficient? How would Ram, the sensing leader, look at some of his team members going forward? Sympathetically, but what could that do to his project?

So, let’s say Ram continues to think hard. As a true professional manager, he feels he ‘needs to’ ensure that his project will be delivered, despite the possibility of lay-offs. So, he starts to plan for the same. He thinks of the various things that the project will need to be ready with – increase the critical documentation; ensure that there’s no single person working in an area – building redundancy; try to get a little more done earlier, so that if and when the message comes in, he has some cushion built in his plan. With this and his earlier plan of pushing the organization not to touch his team – he has definitely moved ahead. He’s now moved from being worried, to hoping, to will act, to acting. Definitely better. He may not be fully at ease – but he knows he is doing the best as the professional project manager. Is it all, he can do?

Well, Ram, feels bad for his team. With the rapport, he has built over the months – he thinks if this were to happen, it could be devastating for some of the folks in the team. So, he ‘wants’ to do something that can help them and the project. He looks at the skills – that are needed in his project; the skills that are have a luke-warm need in the market, the ones that are valuable. He now wants to work with his team – as a true leader – to help them build a future; by helping build skills in the areas that valuable. He also wants the team to step up and take more responsibilities in the project; and operate efficiently. He can then divert the additional bandwidth to help them build these skills. He’s now fairly confident that this is what he ‘wants to’ do. He believes he’s doing it right by the organization and by the team – who regard him well.

Now, Ram, is preparing his team to deliver and grow – irrespective of lay-offs or no lay-offs! A true caring leader, as I see.