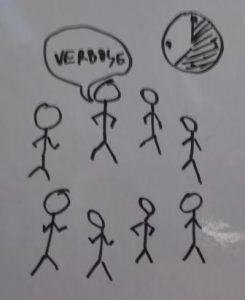 Here is an update from Rekha, one of the team member from the teams I was coaching.

I am working on TSK-206, I took the build, tried to test on ST-OS1 setup, was unable to test. Then I tried ST-OS3, then Nithin told me that he had changed the environment to test earlier build, he also told I cannot use ST-OS2. I tried TST-OS4, it did not work. Then I went back to ST-OS1 and made some changes to config files and started testing, it worked.
I will continue to test.
No impediments, as of now, as I have resolved.

The above took a long time, what is captured is a summary.

The updates in the Daily Scrum for this team has become a sharing of sequence of events that had occurred and had no focus on or mention of the outcome. As mentioned in the previous blog, this change had happened over a few days. with members shifting to verbose updates one by one.

I waited for the Scrum Master or a team member to ask questions, the token was passed on to  Mohan who was to give the update next, I had to interrupt Mohan before he started.

I asked Rekha, “How much of the testing is completed? When do you expect to complete?”

She was quick to realize what I was hinting at.

She laughed and responded, “Oh I am Sorry!” Added with pride “I did update the JIRA with the remaining hours, and know exactly where I stand.” Then continued: “I have done approximately 30% of the testing, and I expect to complete this may be the day after tomorrow, I will be working whole day on this. The environment set up took half a day as opposed to half an hour.”

The rest of the team gave updates which were focused. SM added “environment setup issues” to the list of impediments and reminded the team to bring it up during retrospective if not resolved within sprint.

What I (accomplished) did yesterday?
What I plan to do (accomplish) today?
Do I have any blockers?

In the same sprint, a few days later the update from Rekha was:

I am working on TSK-209, I took the build, had to try five times on three test setups, before I could start testing. I am 40% done on the testing. I will be completing the testing by end of the day and will take up TKS-211 next. I lost about two hours in setting up the environment, this may recur for other tasks.”

Ramesh. one of the team, said that he is interested to know the details, and if she could share. Rekha looked at SM and me and said with mock anger: “See when I give details I am told to avoid it and now I am being asked for the details.”

Scrum Master Arti, smiled and responded: “Rekha, your update was good and too the point. It is good that you processed the data and presented the information. This will be of interest to few of the team, not all. So let’s continue with those interested after the daily scrum and cover that.”

After the Daily Scrum, all the entire team stayed back to listen to Rekha, heard her out and brainstormed on how to avoid that.

It takes some effort to make your update specific. I shared another blog with them, based on an experience from my very early days in my career. Do take a look and share your views on this as well as the referred blog.

Conclusion: The Daily Scrum should not be cryptic nor verbose, it should have information from each team member, that will help team evaluate how the Scrum is progressing and what steps are needed to get back on track, if deviating. The Scrum Master as well as the team member should be alert to how the Daily Scrum is done. Asking somebody from outside the team to come in as an observer occasionally helps, they can provide inputs on what is amiss. The coach is doing that in the initial coaching phase.