Ram, a Test Lead, had been working for eTravel for the last three years. eTravel has a cloud-based product for frequent business travellers. When his organization decided to adopt agile practices two years ago, he chose to take on the Scrum Master role.  The feature team, that he was part of as SM, had the services of an external coach for the first six months. Over the last 1.5 years after the exit of the external coach, Ram had proven to be an effective Scrum Master and an internal coach. Not only was he able to facilitate practice adoption in spirit but also to coach the team to improve predictability and velocity. He guided the team to assess the strength of its own agile practices and improve outcomes. He was very proud of his team’s achievements and was happy with his career move from Test Lead to Scrum Master role.

Management recognized Ram’s performance and supported him in getting certified externally as an Agile Coach. He was given the additional responsibility to coach a critical feature team which was struggling to meet its sprint commitments consistently. Ram saw this as a career opportunity and he knew that his performance could pave the way for a promotion. He decided to act fast and thought it would be good to baseline the current state of agile in the second team. He also felt such an assessment would help the team to get a comprehensive picture of the areas of improvement quickly. Although Ram felt he did all the same things as he did in his first team, he found that the second team was not responding to his approach. Team would go through the motions of assessment, retrospectives and improvement actions. However, there was hardly any improvement in predictability and the team came up with good technical reasons for the slippages.

One quarter passed by and Ram was getting frustrated by the “culture” in the second team. What do you think could be the major reasons for the second team’s “resistance? If you were Ram, would you have done anything differently?

There could be many reasons why Ram was not effective in coaching the second team. It is difficult to identify all the reasons given the limited context in the CHOW. There is one major reason that stands out based on our experience – that has to do with trust.

Let us use the Trust Equation to help us analyse the situation. 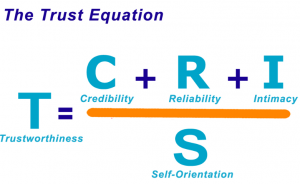 When Ram joined the second team as Scrum Master, he had Credibility (experience and coach certification) and Reliability (he had proven himself in the earlier team). Intimacy might have been an issue. While he wanted to help the team, he may have jumped into an assessment mode too soon. ‘Assessment’ often alienates the team from the assessor when it is done before team starts trusting the coach. Team might not have been comfortable exposing the skeletons in the closet to an ‘assessor’. Ram would not have had this problem with the first team because he was already a part of the team before the agile journey started. Ram would have been better off giving the team some time to trust him – time to clarify his intentions, observe the dynamics in the team, build relationships with key people – before launching a comprehensive assessment exercise.

Let us look at the Self-orientation – the denominator. There was definitely a significant difference in Ram’s mindset with the two teams. With the first team, his entire focus was on getting the team to perform & improve and he was proud of team’s achievements. With the second team, he was in a hurry to prove himself. His own self-interest in promotion diluted his intensity to serve the team. Often teams sense this and do not respond very well.

Hope this helps you as Scrum Master and Coach in enabling transformation of the teams that you are working with.